It's been awhile, and we have lots to write about, but it's just been super busy.

Yesterday we went to a caravan auction and there were a couple of units that were decent for $200-300, but that was too much for a unit that wasn't "Great"  that we didn't have good feelings about.   There were a few $35-45 units that were okay, but they needed a lot of work, and it's not that we're lazy, just that we currently have about 3-4 units that we haven't even opened/dug yet, not to mention lots of friends that are moving that need us to sell all of their stuff.  So, there's no need for more small, non-exciting inventory.

Which is exactly why when this door rolled open, we decided we were not interested.  2 SUPER FUNKY mattresses (you can see the mold and mildew in the pictures),  and a couple of little things.  I saw some purses that seemed in good shape, so that was a good sign, but everything was just thrown all around.  Had it not been for the mattresses I would have maybe considered it but did we mention the mildew?   So we moved away from this, the very last unit of the day.   Only everyone else did too.   The auctioneer was having us sign a no bid (witnesses are required to sign that no one bid on the unit),  and it was then that we remembered that we have a friend with a dumpster very nearby.... SO, we went ahead and bid $1 on the unit and that was that.

It's been forever since we've gotten a $1 unit, I can't even remember how long, and I was kind of surprised because there was this bottom feeder guy there (he buys EVERYTHING under $20 and has a particular affliction for old mattresses) and a couple of newbies and none of them were interested.  Their loss, our gain.  At $1 I figure even if we sell the 2-3 purses we have tripled our money, so we're in good shape.

Here's what the unit looked like when the doors rolled open: 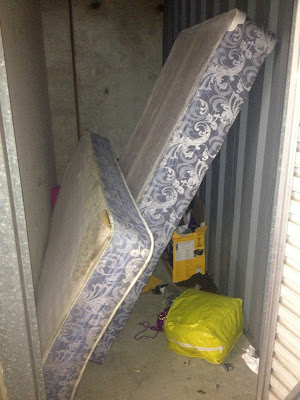 Notice all of the stuff thrown on the floor behind the mattresses: 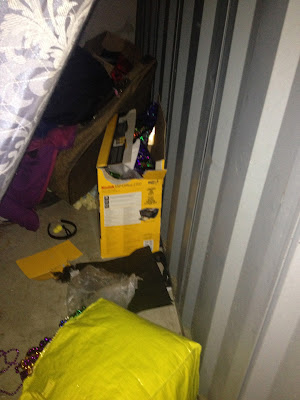 This is a new one!  A peanut butter jar filled with....  pieces of mold and mildew?   Not sure if this was sheetrock, or paper...    remnants of a peanut butter sandwich?  Or maybe it's proof for an insurance company of Katrina damage?    Whatever the case, it was pretty gross.  There was lots of trash and old food in this unit. 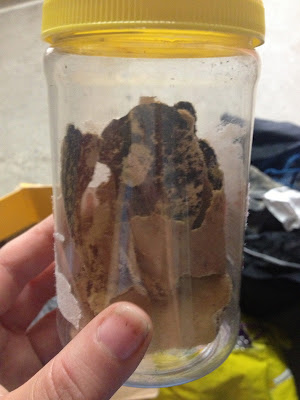 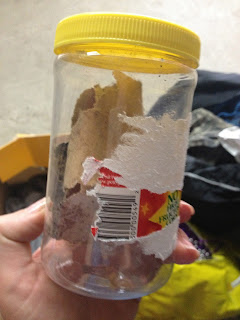 A bag of Mardi Gras beads is a staple in New Orleans.  It's either a sign of someone who rides in parades themselves, or someone who is not a lifelong resident of NOLA (ie, they are new to the city and want a souvenir) :) 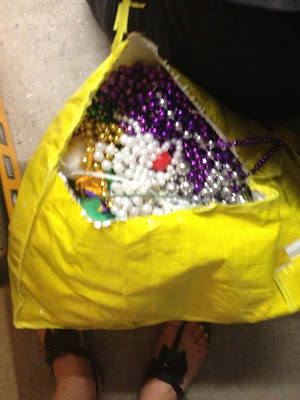 Lots of duffle bags filled with clothing.  The men's pants are all pretty nice. 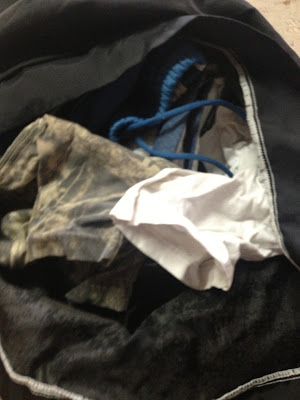 Boxes and bags filled with clothes. 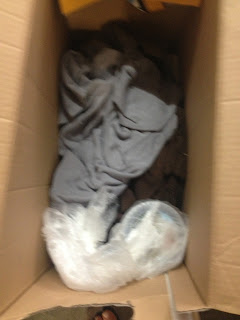 A few suitcases filled with clothes too!  There were also a lot of bath mats, towels, curtains, that sort of thing. 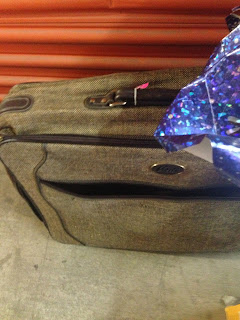 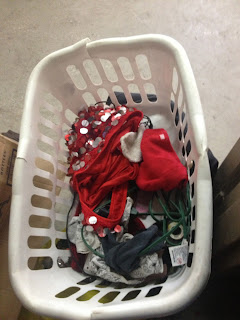 And in one of the little boy's lunchboxes I found a camo swamp boat!  Yes!   #louisianalove.   Plus, we LOVE Duck Dynasty so this was a cool little find. 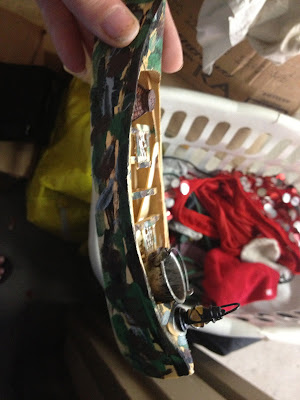 There are the purses we saw!   Some of them are really nice... so at least that triples our money just right there. 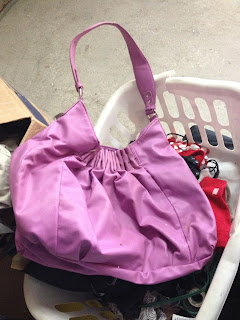 I almost impaled myself while bending over picking up clothes on this long metal rod.   Took forever to figure out what it was.... the BOTTOM of a salon style barber chair.  A shame we didn't have the whole chair- they are expensive and a very easy sell here,  so sadly we had to throw the bottom away. 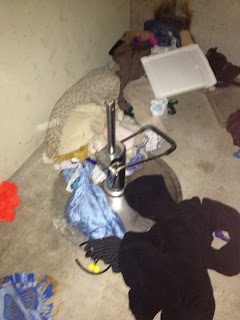 While I was moving around one of the duffle bags filled with clothes there was a loud thud at the bottom when the bag hit the ground.  That's always a sure sign that you have something besides clothes in the bag, and we sure did.  I took all of the clothes out (Brian was getting rid of the mattresses during all of this, btw, credit where credit is due!)  --  and I found a glasses case, and a few toys, including this Ken-ish-GI-Joe-ish kind of man doll.      I swear he was looking creepily at me.   So,  I threw everything back in the bag to try to consolidate (we were in the car and not the van),  and I SWEAR TO YOU ,  this is how the doll NATURALLY landed in the bag.  I noticed it when I was moving.  Couldn't have done it any better if I had tried to do it that way! 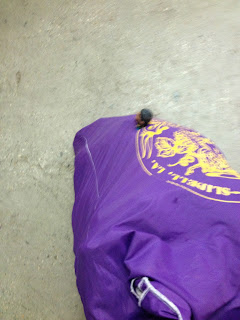 Look at that little creeper checking out his surroundings! 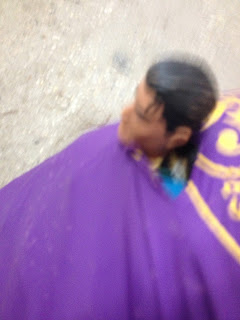 He's still trying to stare at me! 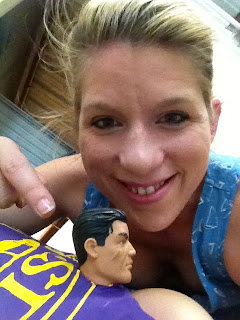 Okay Ken-Joe, you win, you can have a kiss. There was also an AWFUL lot of bedding.  Probably over 20 blankets, 10-15 pillows, and some stuffed animals.  Took us awhile to figure out why (maybe that was just the easiest thing to leave or the cheapest thing in the locker, or because they were so dirty they need to be abandoned, whatever).   We did find a card for Children's Hospital and evidence that the family had lived hours away in Mobile, Alabama.  I know hundreds of children travel from very far away to go to Children's Hospital, and this storage facility is very near the hospital, so I'm guessing that's what happened here. 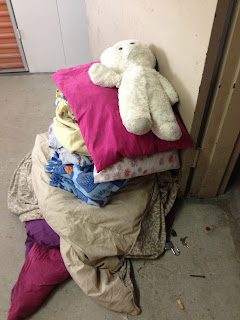 Our thoughts and prayers with this family- we hope everything is okay for them! 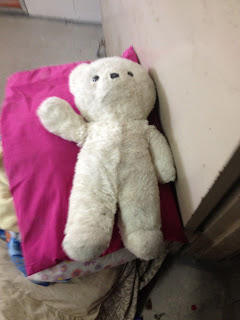 On a lighter note, this fuzzy headband wobbled as I was walking through the pitch dark unit and "ran" across my leg and it scared the bejeezus out of me! 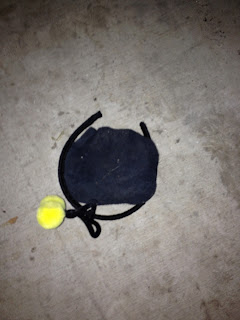 It didn't take more than a half an hour to pack up the unit and everything was going great until we realized that we had filled up the car.  Oops.  We didn't have very far to go, so Brian piled the clothes on the hood, the pillows and blankets on the roof, and the bottom of the chair on the trunk! 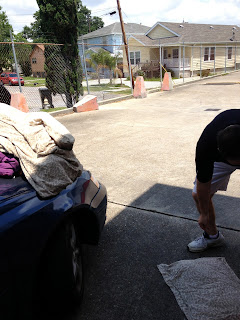 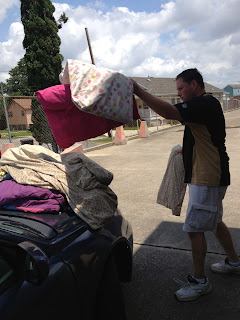 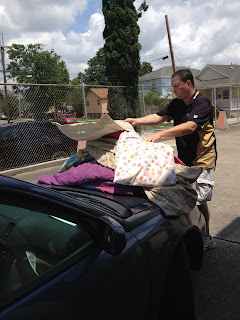 You should have seen the looks we got driving out of the storage facility! 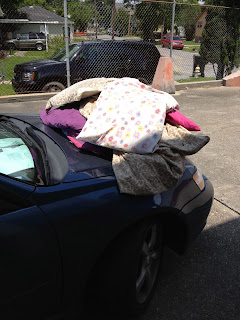 And of course, when I opened the trunk, there was that doll, staring right at me! 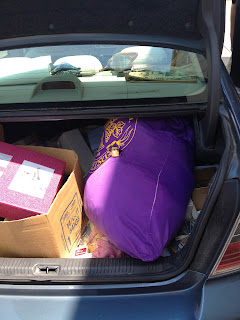 We bring the fun to auction--