We bought this unit back around the first week of January-- one of the days where we bought 3 units in one day.   There was the Company Unit, the Penny Saved Unit, and this unit--  a football coach's unit.  With the Super Bowl coming quickly, we figured this was an appropriate time to finally get to this particular blog!
When the doors rolled open, the unit was in slight disarray but not as bad as we've seen at this particular facility in the past.  Immediately visible was a trunk, some bins, and a lot of sports equipment and memorabilia.  Helmets, jerseys, and footballs were all immediately visible along with what looked like it might be camping equipment.  We found out later it was actually tailgating equipment, but I guess it serves either purpose!  I can't remember what we paid for the unit, but I'm pretty sure it was $100-something.   Here's the initial picture: 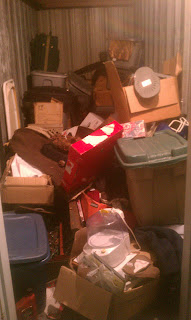 After we paid up and such, we immediately headed back to see what we had.  Storage Heroes reader & fellow auction buyer Chris just happened to be hanging around, so thanks to him we have a few more pictures of this part than we normally would have!   Here are the first two bins that I pulled out of the locker: 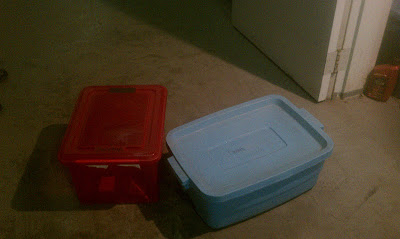 The bins contained a TON of coaching materials.  And when I say a ton, I mean, chock-full.  There were playbooks, depth charts, paperwork for drafting players and evaluating players, and all sorts of other goodies.  Apparently our tenant had coached at both the high-school and college level and had accumulated paperwork from all 7 schools that had previously employed him.  Normally, someone may just throw this away, but we find value in everything, and fortunately, both Chris & another of our friends are football coaches, so they got most of this material to put to good use!

The next box that we pulled out contained more football equipment-- pom poms, pieces of uniform and equipment, and a megaphone, which much to my chagrin, Brian took an instant liking to.  Like he NEEDS to be any louder! 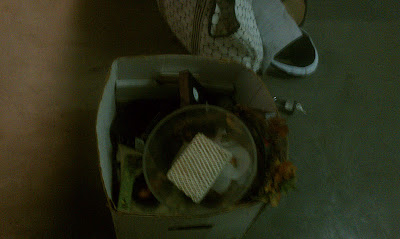 More coaching materials including books & playbooks.  I'm sure these coaches and schools would be totally dismayed to learn that these playbooks were floating around!  On the bright side, at least they are a few years old so the players/plays are probably not completely up to date anymore.  Our friends will still be able to have a nice educational resource, however. 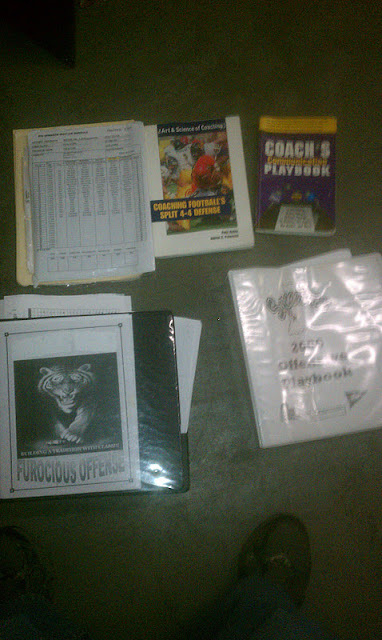 We finally had the area around the trunk cleared out, so it was time to finally get that bad boy opened.  The auctioneer and facility management had warned us that the tenant had called and indicated that there was a large amount of personal pictures and paperwork that they wanted back, and that it was so much that instead of bringing it down to the office (our usual procedure), we should just leave it inside the unit when we're done.   They also warned us that a great deal of it might be enclosed inside a trunk-- so we weren't expecting much of monetary value from this -- but we were eager to get it open anyway, out of curiosity's sake. 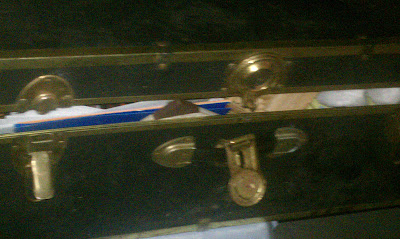 As expected, it was entirely full of personal documents.  What wasn't expected was the AMOUNT of personal items.  Jerseys, t-shirts, yearbooks (at least 12, pictured here),  photo albums, and more--- why couldn't something so organized and sentimental be kept elsewhere? 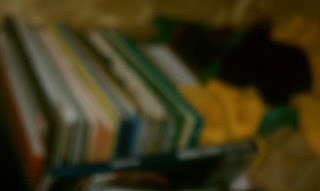 Another picture of the contents of the trunk: 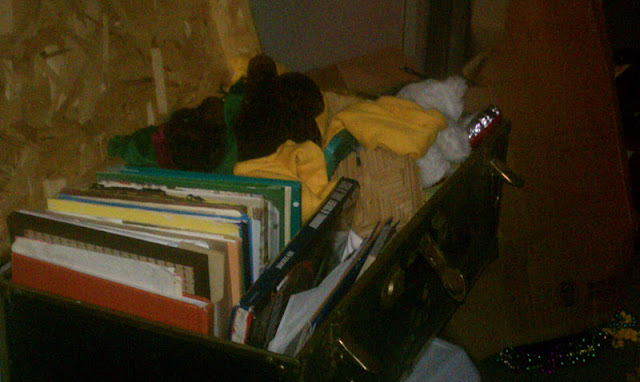 Back to the unit --- there was a lot more to get out, but for now we just had to take what we could and leave the rest for the next day.  Here's a photo of contents we were able to uncover but not yet go through: 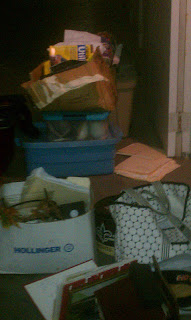 More contents we'd have to go through the following day: 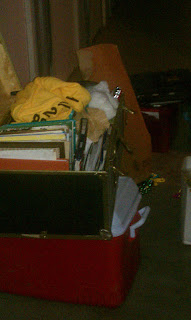 Before we left, we also found quite a few autographed posters.  One of the 2006 Indianapolis Colts,  one or two from the college teams this tenant coached for, and one really cool old poster of every single player of a team that New Orleans used to have in the early 1990s but doesn't anymore, the New Orleans Night.  Our current Arena Football team is the New Orleans Voodoo and our NFL team is of course the Saints, but before the Voodoo we apparently had this team the Night.   A poster of every player of a team that doesn't exist any longer is pretty cool, in our opinion.  If I can track down pictures of these items I'll post them here.

The next day, I was all alone for the first little bit of the dig... here's a video I took of how the unit looked:

Brian came by later and we were able to get all of the items out (minus personal documents)... and get it into the van.  While we were there we got a phone call from a TV producer looking to feature us in a show (don't get too excited, it happens ALL THE TIME these days)-- and while I talked to him, Brian did a fantastic job of sorting personal versus sale items and loaded the van.   We just basically did a drive by, packed and left.    Before we left though we did manage to have a tiny bit of fun:
In this video, you'll see me stepping on glass (my 2nd injury of that unit--  I had stuck my hand through a screw in the wall accidentally the day before),  and forgetting later on and putting a helmet on my head that broken glass was inside-- showering it all over myself, while Brian, of course, laughed hysterically.
You'll also see my beloved Southern Belle t-shirt, given to us by our friends at 300 Balloons.
The next day, Saturday, we were having a garage sale at our warehouse location.  The weather was terrible so business was relatively slow--  there were still customers but both of us weren't needed.  Brian entertained the customers and sold to them while I diligently looked through what he had packed up the day before.
A bunch of Helmets, caps, uniforms, and football equipment (from a local high school).  It's VERY similar to the New England Patriots logo so maybe we'll be able to get rid of some of it this week before the Superbowl! ;) 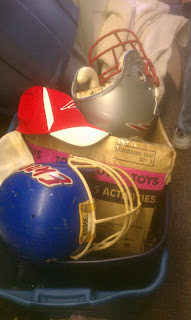 A bunch of footballs, some deflated: 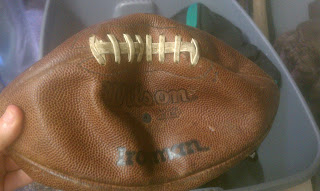 This particular ball is very cool--we knew it was a game ball but didn't know why/how until we researched it further for the entire story... 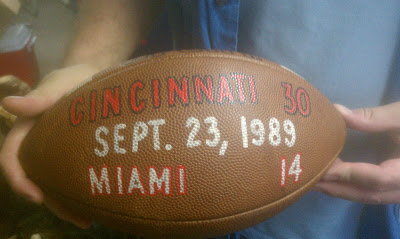 Apparently, this was a football game that occurred on September 23rd, 1989 (duh) between Cincinnati and Miami.  Cincinnati obviously won.   Okay, now here comes what you can't tell just by looking at it.  For starters, Miami does not refer to the U (University of Miami), but Miami University located in Oxford, Ohio.    These two schools have a big rivalry,  a rivalry so huge that they have their own bowl game each year that has occurred each year since 1888.    In this game, the Cincinnati Bearcats play the Miami Redhawks in what is now called the Victory Bell.  (Follow the link for a history and scores).   In this particular year of the bowl game, Cincinnati won-- but what's even more peculiar about that particular season, is that it is their ONLY WIN of the entire 1989 season.    Pretty cool, right?  We're currently talking to some experts and should have this ball up for sale on Craigslist / eBay / Bonanza soon.  Let us know if you know a diehard Cincinnati football fan that would be interested! 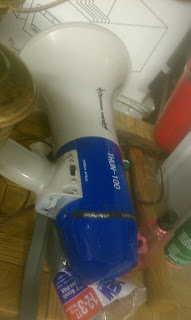 Some gym bags, always useful... plus, another bin! 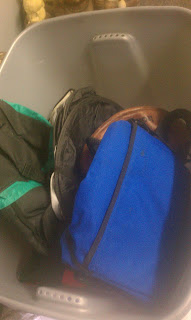 A sample of the thousands of football plays we came across: 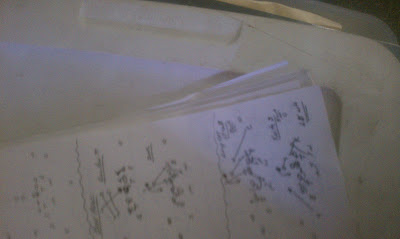 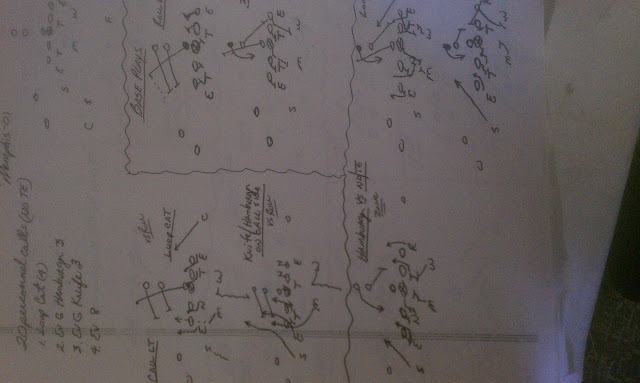 A drawing of an elf, drawn by the tenant's child: 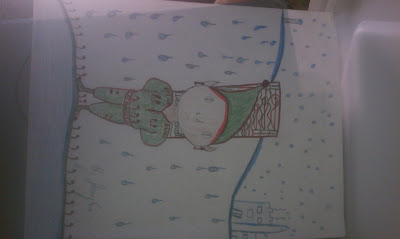 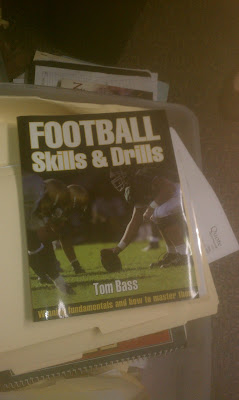 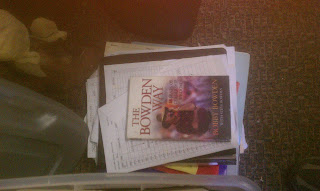 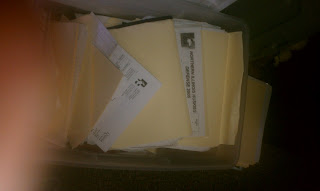 A really cool official NFL Saints Football tin... THIS will DEFINITELY go to good use! 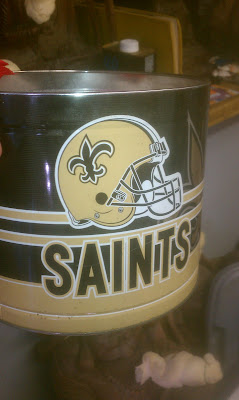 A typical story of tenant paperwork-- lots of cash now loans, past-due bills, evidence of prior defaults at other storage units, and lots of bad check notifications. Among the notifications were TWO---  one for a bad check for $35.00, written to Domino's Pizza,  and another a year later, for $175.00 for... you guessed it... Domino's Pizza.  I can ONLY assume that these were to feed the team!  (I hope)....   the tenant sure had terrible luck when it came to writing checks for pizza! 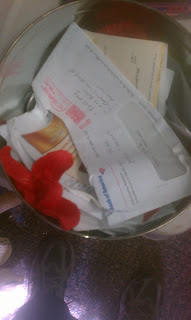 There were also some confidential documents that should have NEVER left the school system.  We find this a lot and always try to return them to the school system, but it's a shame that this happens in the first place.  If someone defaults on their own storage unit, that's one thing-- but I can't believe people default knowing that other people's confidential information can get out to strangers!    Normally we do return all documents to the facility for the tenant, but because these were in the Saints tin we missed them--- because it's not the property of the tenant; however, we will return it straight to its owner, the school system.  Pictured below, is a confidential student evaluation, and also some other poor student's ACT score report-- I hope they got a copy of them! 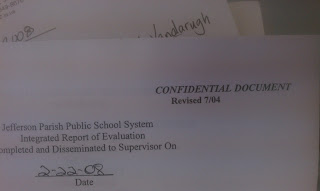 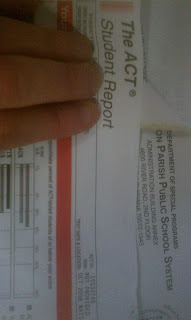 As mentioned, we also had a lot of other things, but they were nothing spectacular or exceptionally noteworthy so we didn't take pictures.  Plus, we were trying to get 2-3 units out that day!
Other finds included:
* a large grill
* a portable grill for tail-gating
* a cooler
*a portable fridge that you can plug into a car's AC adapter
* 2 air mattresses
* a portable radio
*a portable TV
* a patio table
* several pop up chairs (we call them "Mardi Gras chairs" in New Orleans as they are very useful for festivals and parades.  We will DEFINITELY be using them in a couple of weeks!)
that, combined with the football memorabilia, the megaphone, and all of the information we were able to share with our coach friends equals....  are you ready?
TOUCHDOWN!
Until next time,
Storage Heroes
PS - If anyone can tell us WHAT movie our title for this blog is from, and WHAT it refers to in the movie, you will win a $5 gift card to Sports Authority.    First person with the correct answer in the comments wins!
Posted by Storage Heroes at 10:37 PM